These crunchy baked French toast sticks take French toast to a whole new (delicious) level! Easy to make, they’re sure to become a favorite breakfast! Crispy on the outside, soft on the inside!

We’re getting creative with our time at home and in the kitchen right now.

Even though technically on paper we should have all the time in the world to whip up whatever elaborate creation we want (pies! breads! cakes!), some days, the mental energy that would require (and the lack of some more extraordinary ingredients) has us running straight for the super easy recipes.

The ones we can make in just a few minutes…and that can be eaten right away. These easy drop biscuits and granola bites are a few favorites right now. 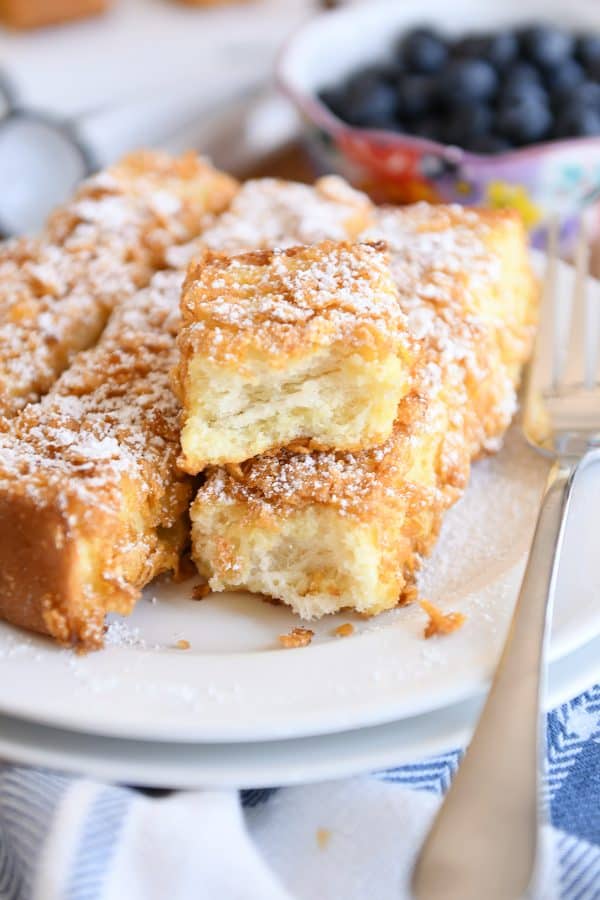 My kids go crazy for these things. We eat them for breakfast, for lunch, for dinner, and any time in between. And…they are easy enough for my kids to make.

There is just something about the lightly sweet crunchy coating and soft slices of bread that make them irresistible. Also, my kids would like me to mention that they are waaaaay better than just normal French toast. 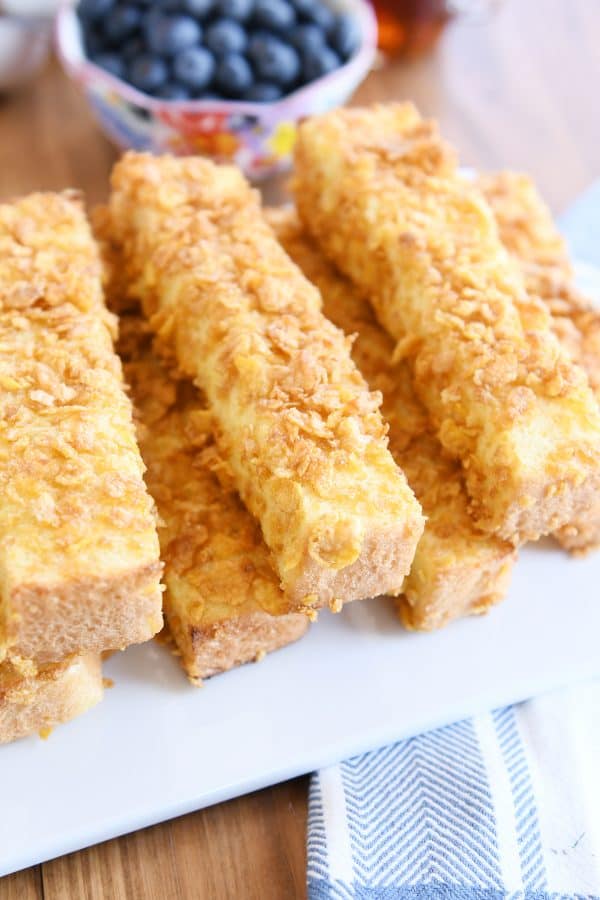 Sure, you could make the whole slice of bread into a crunchy French toast wonder. But it’s a heck of a lot more fun to make French toast sticks.

Is that the stay-at-home in us talking? Maybe. But I think even when we are able to talk to other real, live humans face-to-face again, we’re still going to be making these as little sticks.

They’re cuter. AND they make for better portions (especially if you’re serving younger kids who may not eat a whole slice of French toast). 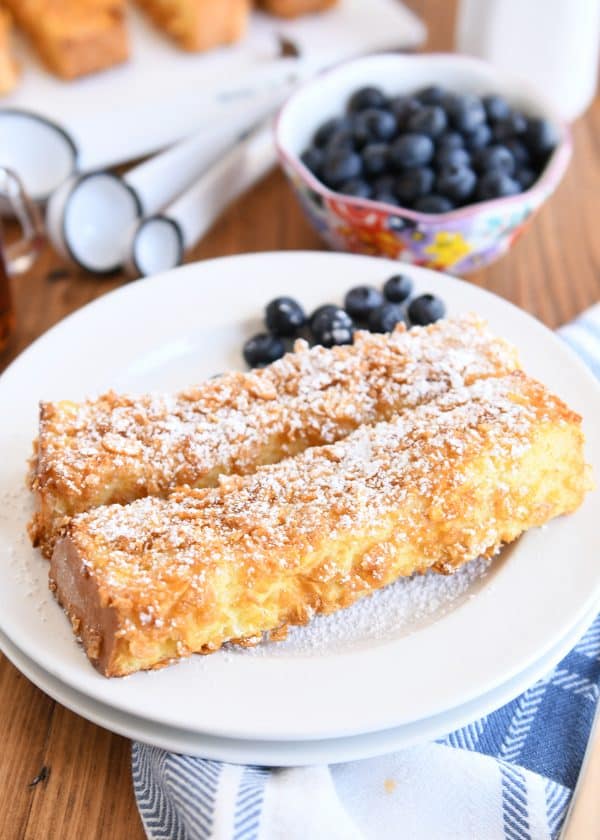 The bread is important here.

Flimsy, thin, fall-apart bread won’t work. You’ll be cursing my name as the bread disintegrates during its dipping session.

You want a soft but sturdy loaf. White or whole wheat, it doesn’t matter. 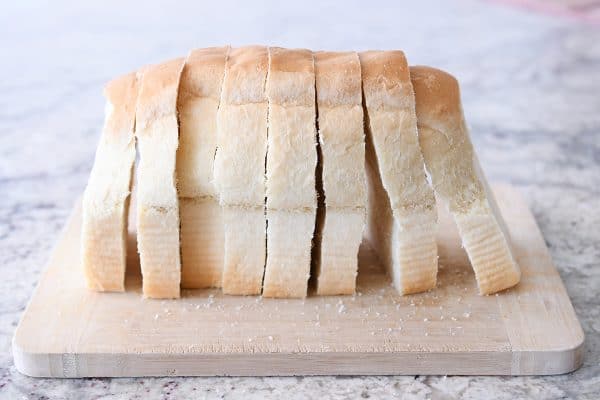 The bread should be sliced about 1-inch thick (more or less). And you need 4-5 slices for this recipe. It can easily be doubled or tripled.

Cut the slices of bread into thirds. If your bread is more wonky-shaped and slicing it just in half or into fourths works better, that’s ok, too!

You just want to end up with some rectangles of bread for the French toast sticks. 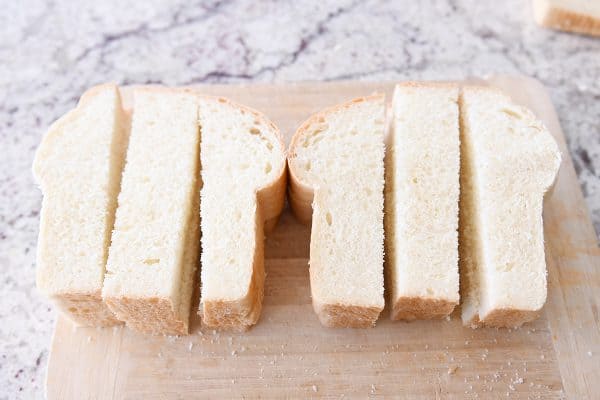 Dip each piece of bread into the egg mixture. Don’t let it soak too long.

It should be a fairly quick dippy-do into the eggs and milk. 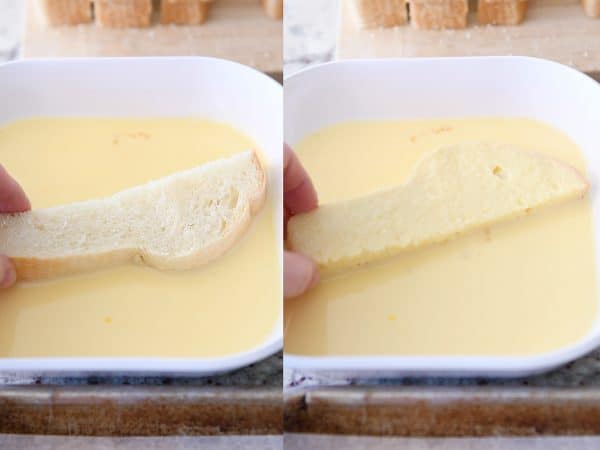 Then press the bread into the cornflake mixture:

I like to coarsely crush the cornflakes so they still have some texture for a good amount of buttery, sweet crunch. 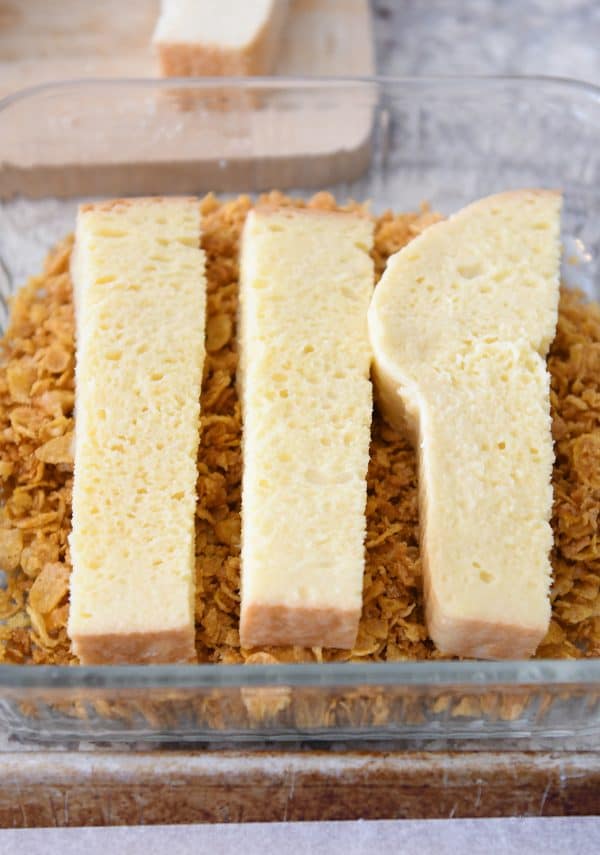 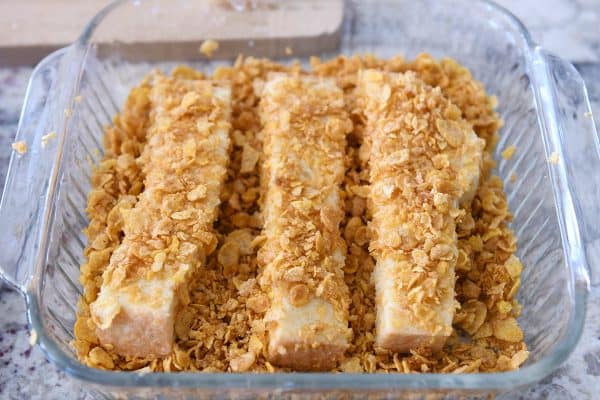 Bake the crunchy French toast sticks until they are golden and no longer soggy in the middle!

Unless you happen to like soggy middles of bread. At which point, I may need to reexamine our friendship. 🙂

In all seriousness, though, the bread will still be soft in the middle after baking, but unless you let it soak for an irresponsibly long amount of time, it shouldn’t be super wet.

The French toast sticks will puff every so slightly while baking to let you know the egg mixture cooked all the way through. 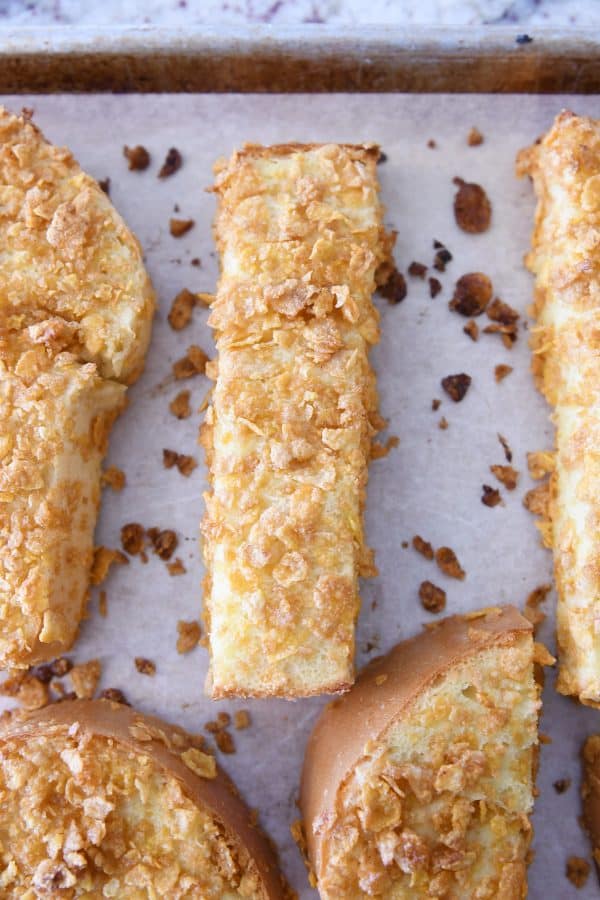 These adorable and delicious crunchy baked French toast sticks are fantastic with a light dusting of powdered sugar.

Or a drizzle of syrup.

I mean, the options are wide open!

If you’re looking for an easy, totally doable, quick baking project, French toast sticks might be the recipe you never knew you needed. 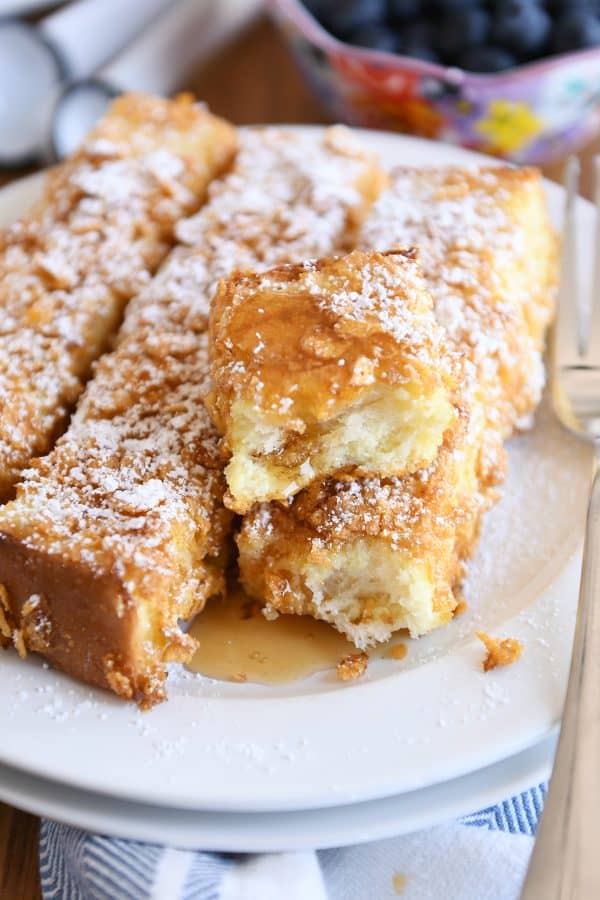 Can You Practice Intuitive Eating And Want To Lose Weight?

What Does “Food Is Medicine” Really Mean? – Performance Kitchen

40+ Healthy Camping Foods To Pack On Your Next Adventure